"But now remains faith, hope, love, these three; but the greatest of these is love." Saint Paul I Corinthians 13

History
St. Paul School opened its doors on Forest St. as a six-room school in 1964. Mr. Ken McKenzie, the first principal, looked after the interests of the 216 students and five teachers. He was followed by George Kron, Rosemary Kennedy and one of our longest serving principals, Mr. Ken Krusky, who served from 1973 - 1982.

The early years at St.Paul saw students travelling to Harcourt Church for Physical Education classes and school assemblies and masses were held in the long hallway. In 1982, funds were allocated to create a portable gym in a moveable structure. Mrs. Josephine Scott presided over the growing school community during those years, and oversaw the inclusion of Grades 7/8 students in our elementary community in 1987.

Eventually a permanent structure which included a new Kindergarten room, a stage, storage rooms, as well as a larger gym was added.

After Mr. Wilke's retirement in Jan. 1997, Peter Ingram took over as principal, and led our community until Sept., 2000, when Mr. Dan McLellan took over. The new St. Paul opened its doors in Westminister Woods in September, 2004. 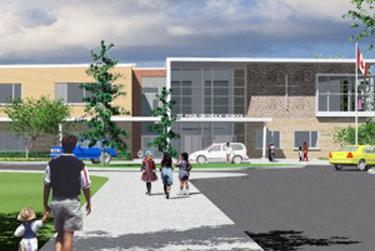 We, at St. Paul School are a Catholic community committed to: